a thought on creativity 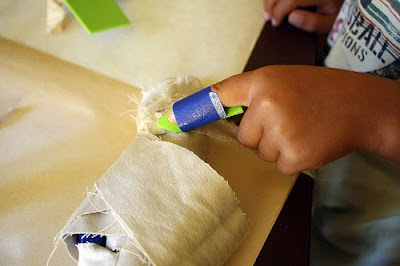 When the nephew a-go-go was working on his mummy he became frustrated with the glue that stuck, stuck, stuck to his fingers. After he did the flap dance (trying to rid his hand of an object that stuck to it), and after many grunts and growls, he decide to make himself a glue finger, something that would help him hold down the glue-tacky strips until they held that would keep the glue from ticky-tacking itself to him. He eyed a piece of fun foam and asked me to pass the scissors and after two attempts/versions he made himself a glue finger. How cool is that?

When I was a kidlet, I didn't have a parent or adult to swoop in to correct me or "help" me when I became frustrated or kerfungled. There were adults around me but I was often left to my own devices. I like to think that these precious opportunities to discover on my own, to succeed or to fail, helped shape the me I am today. Don't get me wrong, there were a lot of tears along the way (including and unfortunate episode, um, yesterday). I am an observer. I observe the world around me. Most importantly people and their actions. Especially the children. When it comes to a project, I like to present the materials and guide the discussion so that it ends with the project that is in my head. For example, mummies. When we made the mummies I had assembled an assortment of supplies and asked how could we use what we had to make a mummy? I didn't tell the nephew a-go-g HOW we were going to make mummies, I let him come up with his own ideas. He started out one way and we talked about what he wanted to do, after some trial and error, he would switch and then switch again until he made a (most awesome) mummy.

Previously, when I have taught art classes or led activities I would do the same, and the kookiest thing would happen over and over again. each time I would talk about the inspiration for the activity, guide the children to the supplies we had and just as the children were about to jump in, a parent, a GROWN UP would say "Wait! What about the instructions? How do they make a pig?" and each time I would say Iin their own way", and STILL the adult was confused. I know we don't want our children to fail or feel the odd person out. I know the intentions are good and true but when you give a child a box of crayons or a container of paint, they should be able to EXPERIENCE the materials they have, the moment ,and the process. When we put our children into a box, we are setting them up for the very failures we are trying to protect them from. This is true in so many areas but most importantly our public education system. I can go on and on and on but I am sure many of you already know this. I would however like to point you in the direction of an article that was recently published in Newsweek called The Creativity Crisis.
Posted by j. wilson at 10:02 AM

Email ThisBlogThis!Share to TwitterShare to FacebookShare to Pinterest
Labels: creativity