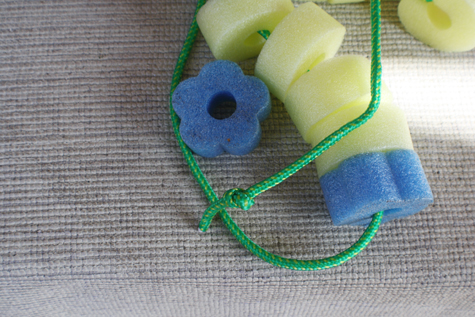 While the idea of purchasing a long tube of styrofoam gives me a bit of an eek out, I do have to say that the product is quite adaptable for the preschool and kiddo world. From car washes to garlands to light sabres the possibilities just keep astounding! 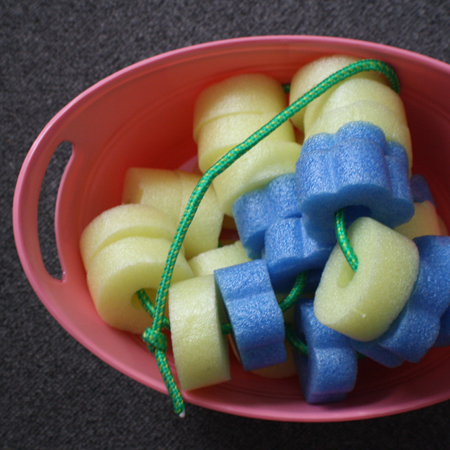 I picked up two noodles from the dollar store plus two jump ropes. Sliced 'em up with a not so great serrated knife and dumped them into a pair of tubs. The jump ropes were unknotted then tied to one noodle-bead each/ The frayed ends were given a once-over with an open flame and set to cool. 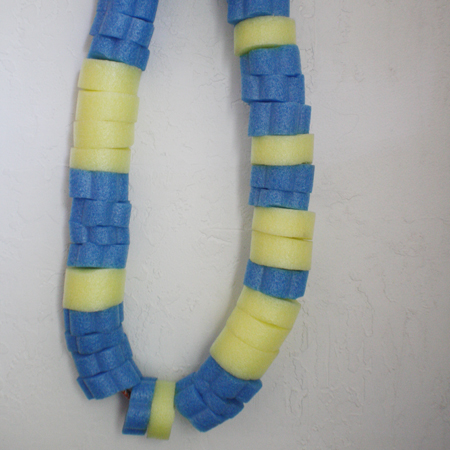 I set the whole she-bang outside for the kiddos and watched. There was some great hand-eye co-ordination going on as the toddlers attempted to thread (and horde, we have a young one who LOVES blue) beads onto the rope along with math as patterns and sequencing happened. Science appeared as some of the beads made their way to the water table...they float! And dramatic play ensued as the older tots turned the two ropes into ENORMOUS fancy necklaces.

This took me all of 15 minutes to prep so what are ya waiting for, it is pool noodle season don't ya know?
Posted by j. wilson at 8:20 PM