adventures with ander and zaza: an impromptu pom pom factory 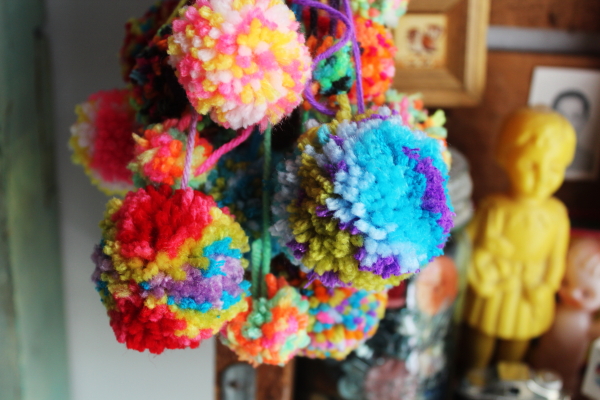 This past week ander and zaza came for a visit. I had made a pom pom wreath for the 4th of July and zaza asked how I made all those pom poms. Out came the yarn and scissors and the next thing I knew we were in pom pom city. It was pom making all the time. There were pom poms here, and pom poms there, here a pom, there a pom...you get the picture. It was also a complete blast! Here are some things we learned... 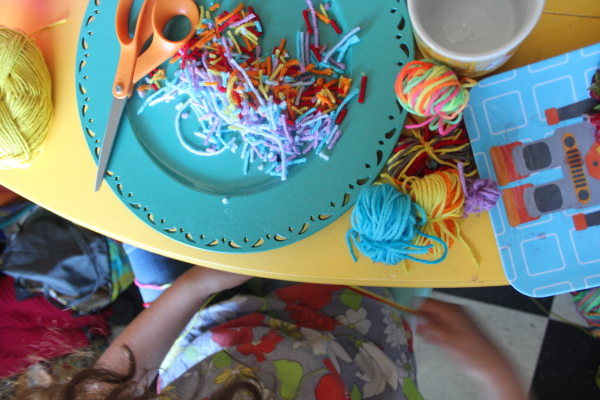 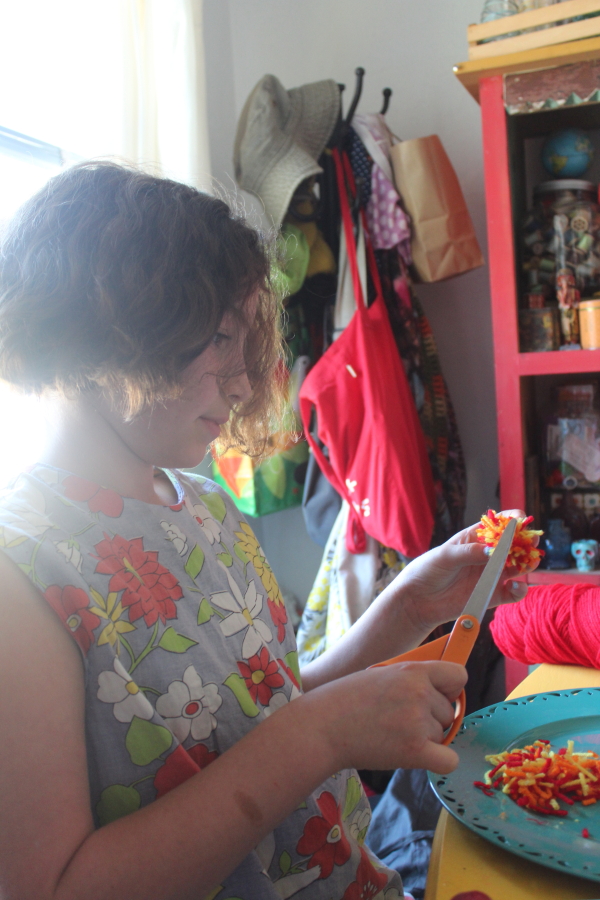 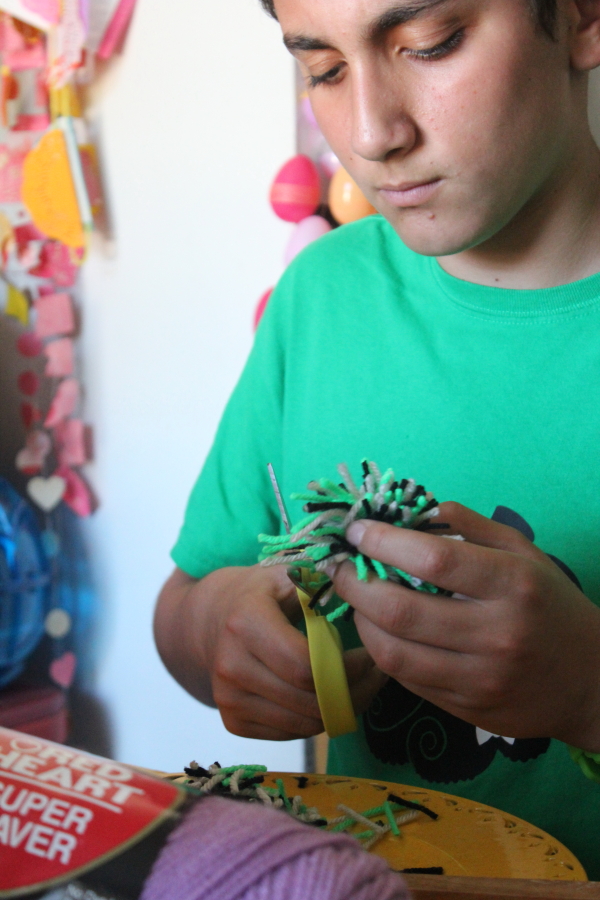 Pom pom making with younger folks is really easy even without a pom maker (it's also easily portable). I demonstrated the HANDmade technique maybe two or three times and the children were off and running. We had to make a special trip to the craft store to bulk up on lovely yarny goodness. 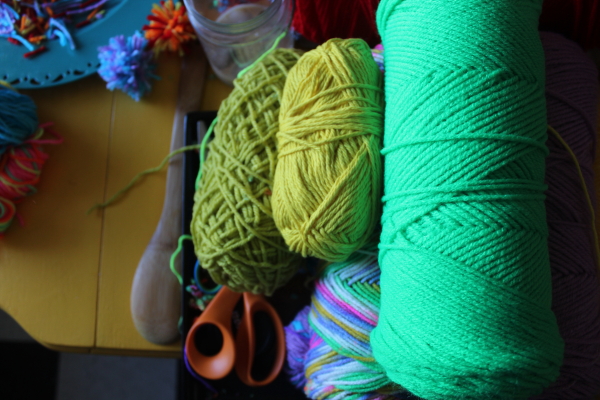 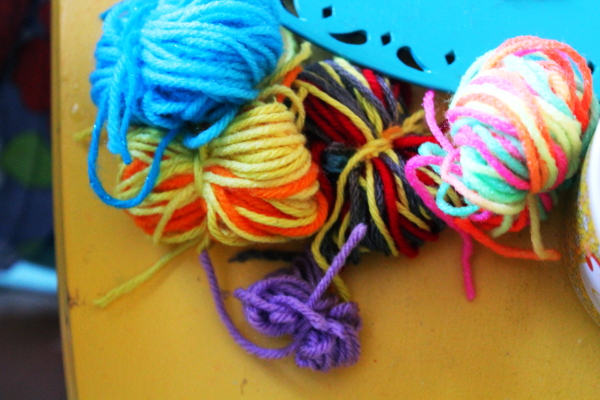 The most difficult part seems to be tying the yarn around the center of the pom-to-be tight enough so that the snipped yarny bits don't slip away. The color choosing and wrapping went by lickety split.  We began by wrapping up our little pom packages until we had a happy pile and then we went to trimming them. The little packages were just as pretty as the poms themselves. 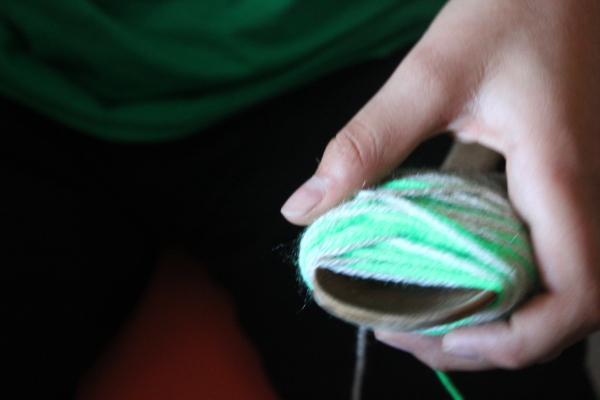 If your child is having trouble wrapping around their hand, they can use a tp tube, piece of cardboard, and/or a wooden spoon or spatula. We tried most of them and learned that a too tight wrap didn't exactly like to slide off the utensil it was hugging. Oh, and for a smaller pom, use two fingers for wrapping instead of four. 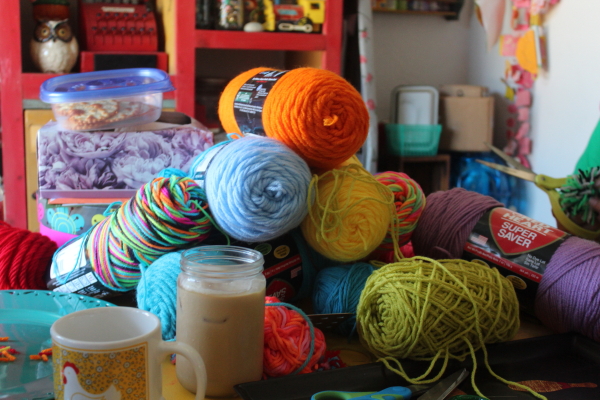 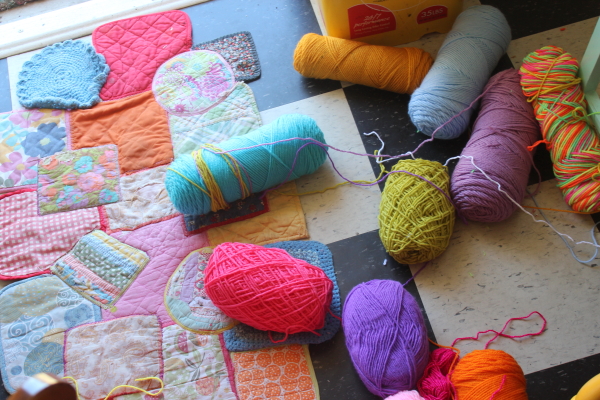 We also learned that if you wrapped three or four colors around at the same time, your pom-to-be bulked up quicker and displayed a lovely confetti effect. Even more so if one of the yarns was variegated. It was also a lot easier to wrap directly from the skein of yarn. The kitchen floor was covered in happy skeins and sometimes they got tangled but they tangled up a lot less than if we cut out yards of yarn before wrapping. 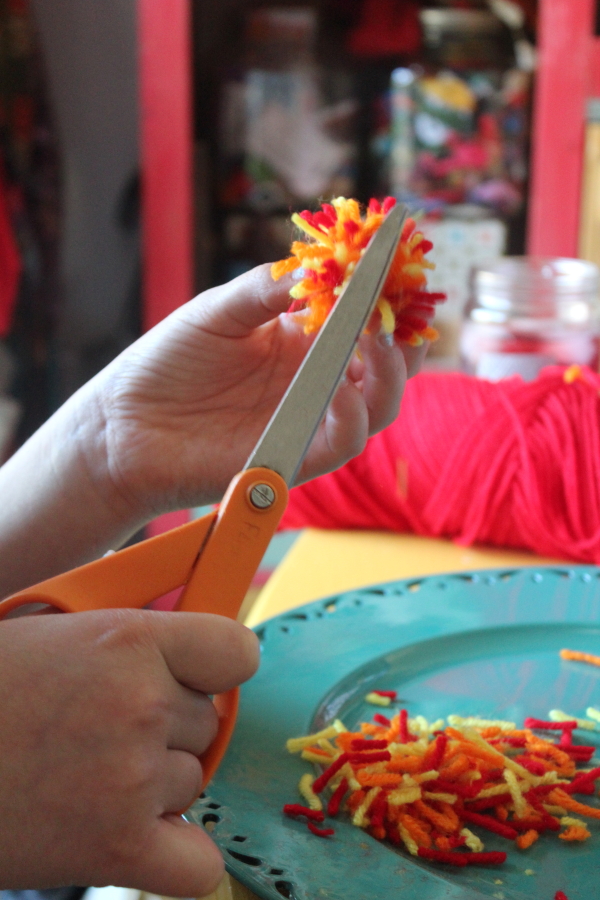 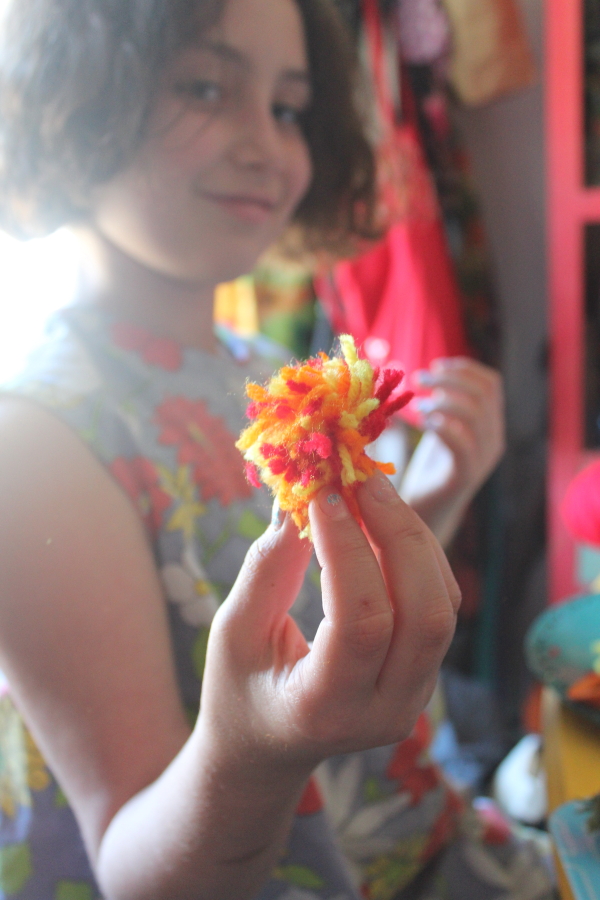 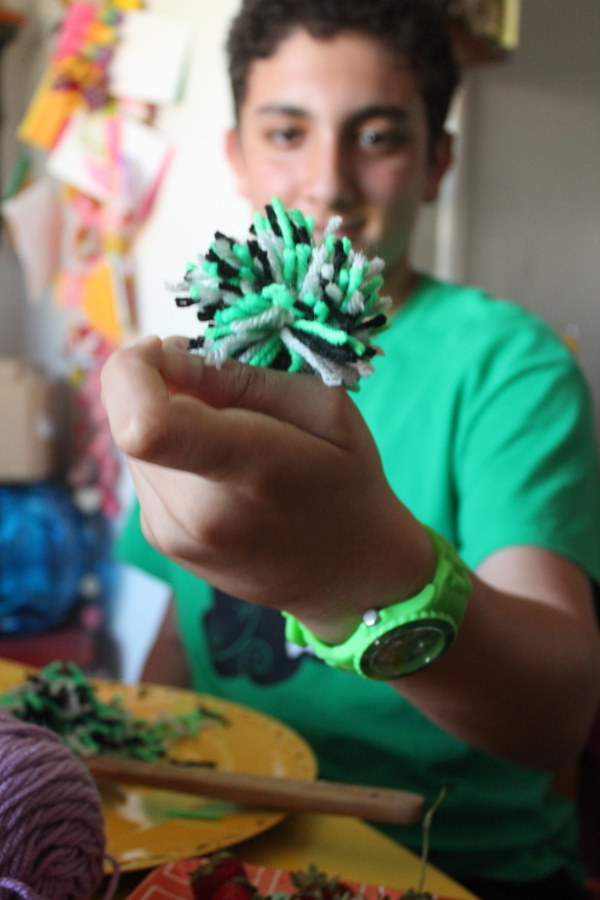 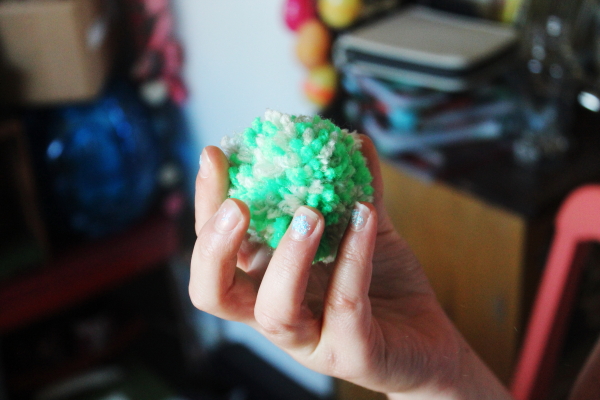 First timers can trim their poms just a little, creating a shaggy bit of pom happy. As your kiddo gets more practice and used to the trimming aspect of pom pom making, they can snip away to create a trim ball of happy. Fabric scissors work best and yes, they do look alarmingly long when in the hands of a kiddo. Our mantra to the kiddos as they got all snip happy was to think of their pom as a bonsai tree. Snip just a little at first and trim as you go. Their first round of poms were happy shaggy bits but as they became pom pom masters they trimmed them up tight. I think they even went back to their first poms and trimmed those down as well. 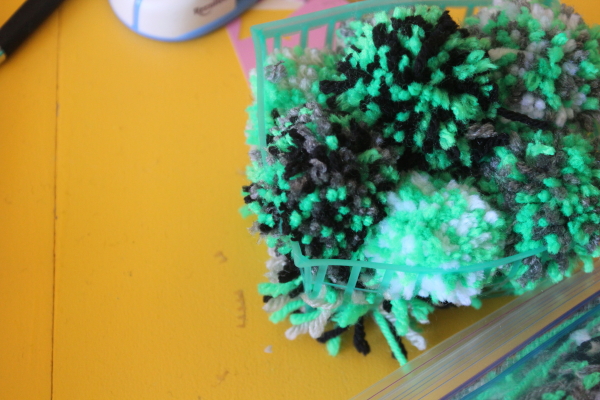 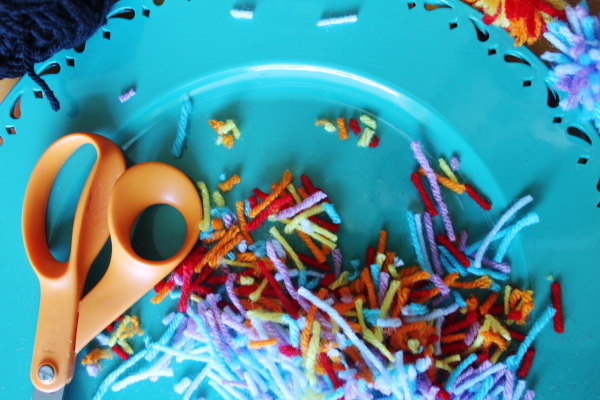 There is a lot of yarn waste when making pom poms. Use a large tray or plate to catch all the bits that fall. We saved the trimmings in big plastic bags for a future project. There are a few ideas and maybe they will get made, we'll see. 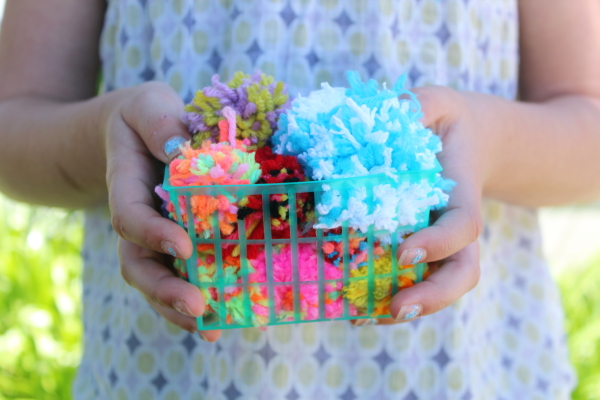 Not sure what we are going to do with all the poms but we did discover that berry baskets make excellent pom pom vessels.
Posted by j. wilson at 9:56 AM

Email ThisBlogThis!Share to TwitterShare to FacebookShare to Pinterest
Labels: adventures with ander and zaza, kidlets can do, pom-poms, take and make, yarn