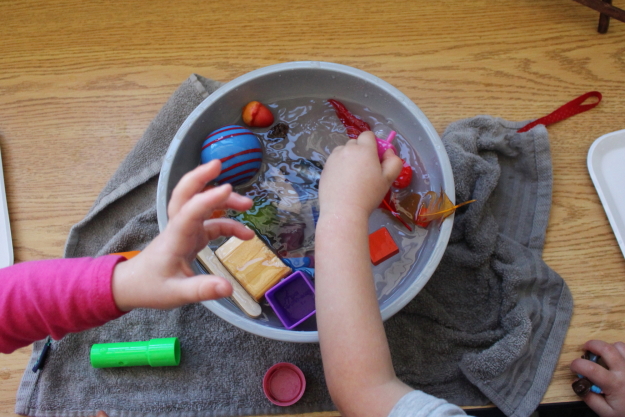 For our week of The Three Billy Goats Gruff, one of the things we talked about was whether or not the Troll sunk or floated when he was butted off the bridge. There was a lot of discussion, with some of the children deciding that their troll would be a nice troll and would not get butted off the bridge, with other trolls sinking to the bottom and living in the river.

With all this talk of sinking and floating on our minds, the children brought in objects from home to see if they would sink or float. We did this at group time first, with each child predicting what their object would do, then we moved it all to the science table for more exploration.

All week long, the children brought in objects to test. There was a lot of activity at the science table. Many of our classroom items took a turn in the sink or float bowl. There may have been water everywhere but it was worth it...so worth it!

This was back in at the beginning of February and just this week, one of the classroom kiddos found a leaf on the playground. They said to me "I am going to see if this floats!" and they promptly placed it on a puddle to discover that it did indeed float! For the rest of the hour outside, various rocks, leaves, and bark pieces made their way to that puddle and it was awesome!
Posted by j. wilson at 11:27 AM