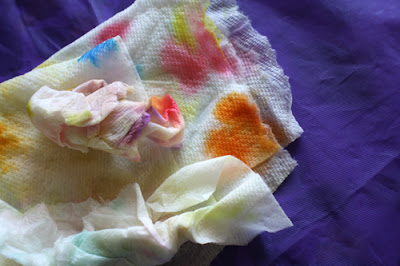 The nephew a-go-go (who is 8) is on spring break this week and next, so we've been puttering around making, painting, drawing and crafting stuff. If the nephew had his way, he'd be making alien something or others non-stop but yesterday, the sister a-go-go pulled out a super nifty project from Water Paper Paint by Heather Smith Jones. The project she selected involved drawing with pencil, a large object and within, a smaller object. You then use watercolor to fill in the background and the small object within, leaving the large object as is. We explained to the nephew that this was an exercise and that for this there would be "rules" to follow. 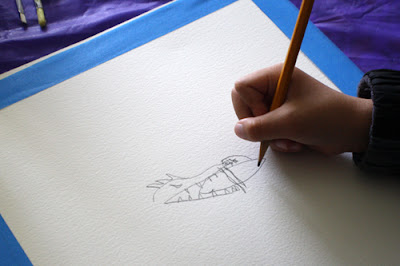 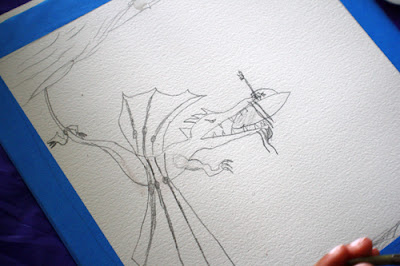 After selecting a piece of watercolor paper (we used all sorts of sizes). He eagerly went to work creating a dragon with a U.F.O. (of course) clasped in its jaws. It was awesome. We gave him a quick lesson in watercolor using liquid watercolors, had him select a paint brush and let him begin. 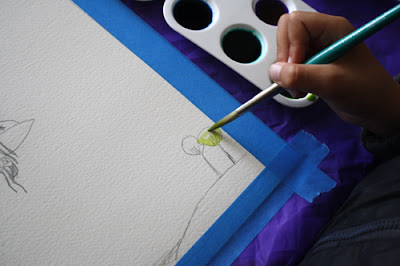 Now, the boy is a bit of a perfectionist and needless to say, the watercolor was NOT behaving in a pleasing way for him. There was a lot of garumphing and frowning. He sighed the loudest sighs and came this close to tossing the paintbrush and giving up on the whole thing. 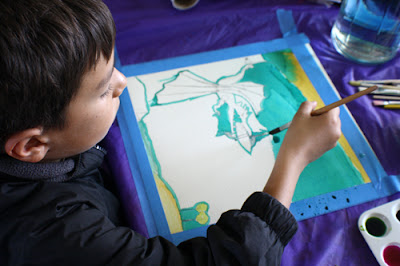 He wanted to start over. He NEEDED to start over but mean aunties that we are we said no. But hey, we said it gently. We encouraged him to move slower, to take breaths. We explained how different watercolor was from colored pencils. We pointed out the natural texture that we saw in his brush strokes and complemented him on color choices and he sighed a little more but kept going. 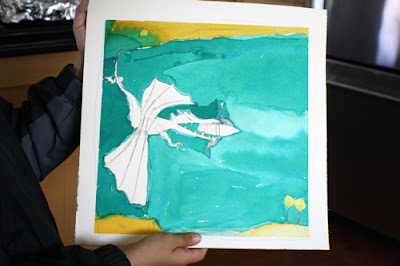 And then he wanted to paint his dragon, which was the LARGE object in his picture and we firmly told him that this exercise did not involve painting the dragon. We told him that he could paint the next dragon but that this one was to not be painted. He was NOT happy with that but I gently told him that this was an exercise. I talked about the difference between simply painting and creating and then creating within limits. I told him that sometimes we get very comfortable with making things we are good at and that working within limits can help us be even more creative. He listened and nodded and continued and made the most awesome painting! 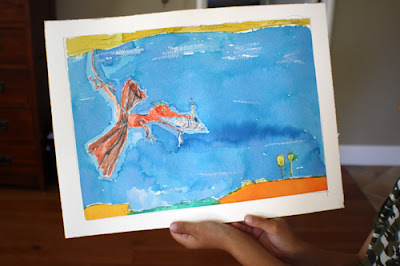 And of course we let him do another and of course he painted his dragon. Actually, he used watercolor pencils on the dragon and then a damp brush to blend. I knew that if he tackled the beast with a wet brush there would have been much anxiety. The cool part is that he really got the hang of it. He talked about how he really liked working with the paint and that he noticed it was different from using pencils. He thought it was a good thing to do the first one as it was practice. I tried to tell him that if we let him paint the first dragon, he then wouldn't have TWO awesome dragon pictures. He even asked his mom if he could stay to finish painting, the boy remained focused and was really proud of his work.

In between it all, we did another project but that is for a different day. So what I mean to share with you is that allowing your kiddos to create for the sake of creating is totally the way to go but sometimes, boundaries too, are a very good thing. Just make sure they match your kiddo's temperament and skill and make sure you explain the reason behind the boundaries.  And if you do decide to do something like this, turn it into a family thing. While the nephew worked on his painting, I, the sister a-go-go and the mama a-go-go also painted and then we looked at how different they were even though we used the same paint, paper and project. Have fun!
Posted by j. wilson at 7:20 PM