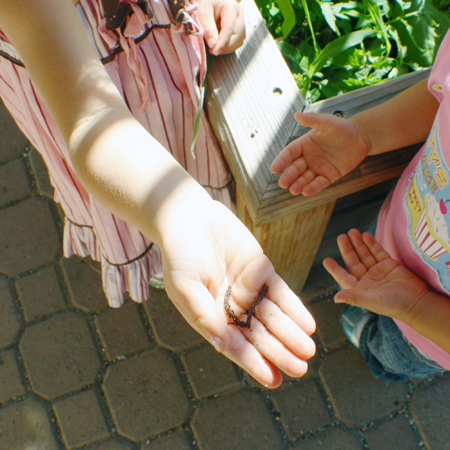 At school last week,  much to her delight, one of the toddler girls found a worm as she was planting her own batch of flowers in the garden. We then spent the next fifteen minutes oohing and aahing over the wriggly little thing. I watched as she passed it along to one girl after the other as each one wanted to hold it. And each time a new lucky child got to hold the worm in her hands she would look up all smiles and announce, "I have a worm!" It's not just a boy thing.

When I was a little girl you could equally find me getting all dolled up in twirly skirts and tutus or elbow deep in mud as I raced my hot wheels around with the rest of the kids on my street. I would loose myself in games of Princess and climb down, down, down the large drain pipe behind our house along with the other kids in the neighborhood. I baked cookies and had tea parties and built houses for roly-poly bugs. My jeans had more patches on them than a king-sized quilt and the amount of pink in my closet would make anyone crave another color...any other color.

I was never called a tomboy, thank goodness for that. I'm not a fan of that term. I'm not a big fan of any term really. Girlie-girl? Blech. Boy boy? Ick. Children are children and as individual as each of us adults. To pigeon-hole a boy who likes to turn everything into a weapon is silly. Girls do it too, I was one of them. Those black laquered hinged plate stands? Those made excellent guns when we played space monster in our third floor condo. They could even be clapped for a shooting noise. It was all my idea.

When your child hears you exclaim "You're such a boy" they might brush it all off being that yes, they are indeed a boy but at some point that term just might define them. Same for boys who like to play dress up and get into the pink and sparkles. There is absolutely nothing girly about it save for you labeling it as such. Switch it up a notch in relation to girls and I'll say the same thing. Simply stop it. The same goes for "She's just shy" or "He's our artist". Take some time to omit labels from describing your child, work on specifics. If your daughter is quiet but really loves cats, then she may know a lot about cats, focus on that. If your son is the artist of the family, focus on the tools he uses, "Sam has been drawing a lot with his water color pencils". Let's work on the individuality of your kiddos be they yours, your sibling's or your friends'.

Girls who like sports and bugs and messy things are NOT tomboys. They are athletic and strong. They are scientists and they are curious. Boys who like to bake cookies, put on the tutus in preschool and dance rather than pass a football are not sissies. They are chefs, they are imaginative, intuitive and they are also athletes.

And for those of you who disagree and think that all boys are most certainly only about super heroes and that all girls are into princesses, I know more than a handful, more than two even that might just sway you to think otherwise. Boys will be boys and girls will be girls if that's the only way you view them.
Posted by j. wilson at 5:39 PM

Email ThisBlogThis!Share to TwitterShare to FacebookShare to Pinterest
Labels: child development, development, in the classroom