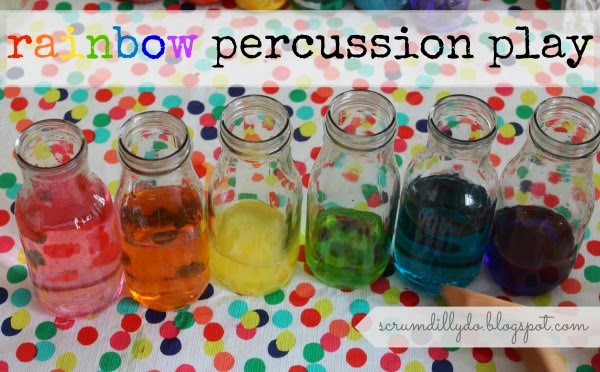 Can you tell I like a rainbow? We made a classroom xylophone using a variety of coffee/frap bottles, liquid watercolor, and water. Our books were A Rainbow of My Own and The Listening Walk. We did this project for both books and again when the children wanted to. We talked a lot about order and sequencing as we arranged the bottles in and out of rainbow order and discussed the steps for making our xylophone. I talked to the children about sounds, vibrations, music, and percussion. There had been a lot of discussion about all of those things in our classroom during the week and creating our own xylophone tied it all together. 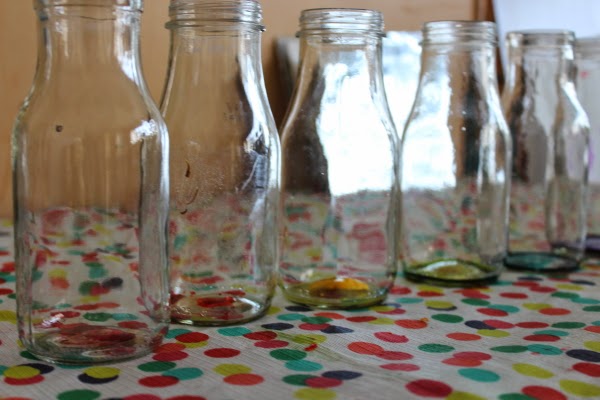 We began with glass bottles (not a bad excuse for drinking fancy bottled coffee drinks) that had just a little bit of liquid watercolor in them. One of the kiddos was really excited to see all of the colors of the rainbow. They had even made sure the bottles were in rainbow order before we began. 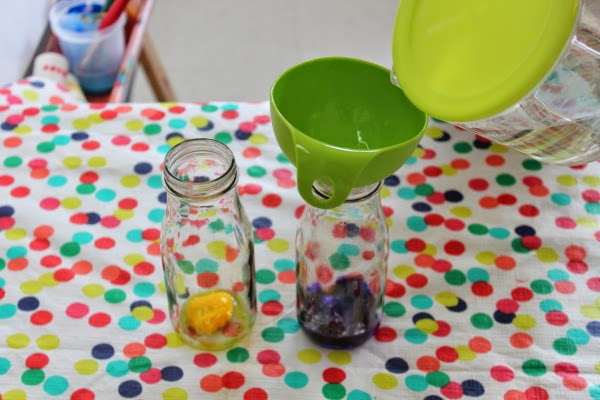 I introduced the funnel as a tool for pouring liquid into the bottles without spilling. The kiddos use funnels a lot in water play and sensory play. This was the first time they were using it as a kitchen tool and they were very excited! 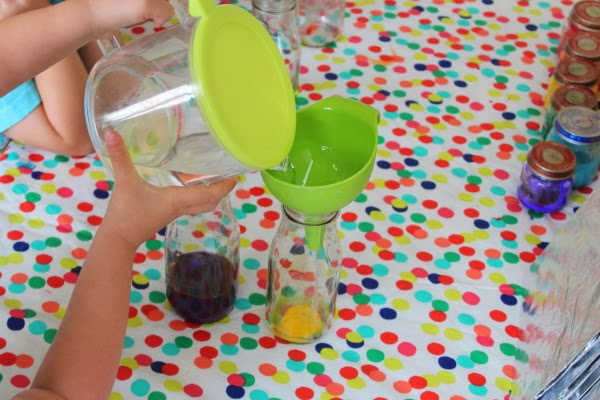 The children took turns pouring water into the bottles. All of them oohed and aahed over the brightly colored water. 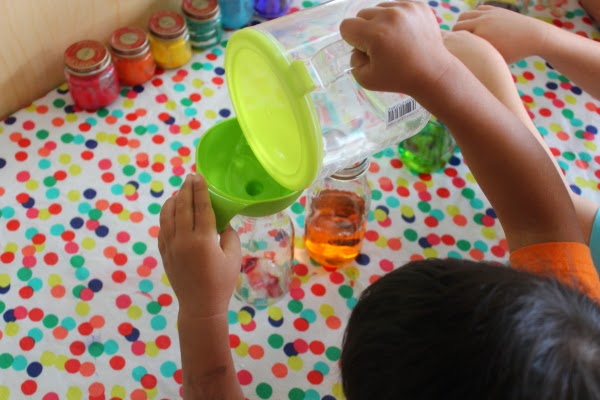 We worked in a small group to give everyone a chance to pour and talk about what they were doing. 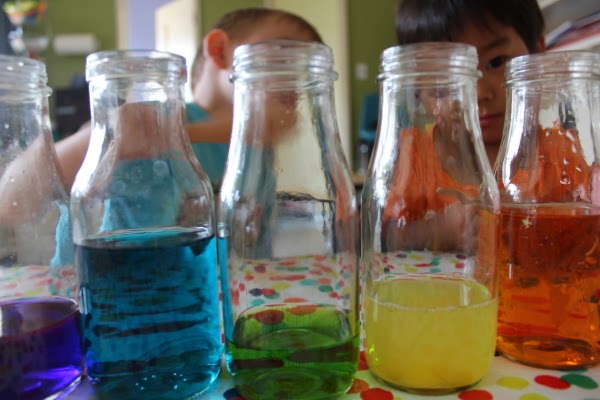 I was surprised and delighted that the children did not wish to pour equal amounts of water into the bottles. There was some ownership over who poured the water in each bottle so later as they played, they would refer to the red bottle as theirs or the blue bottle as his...etc. 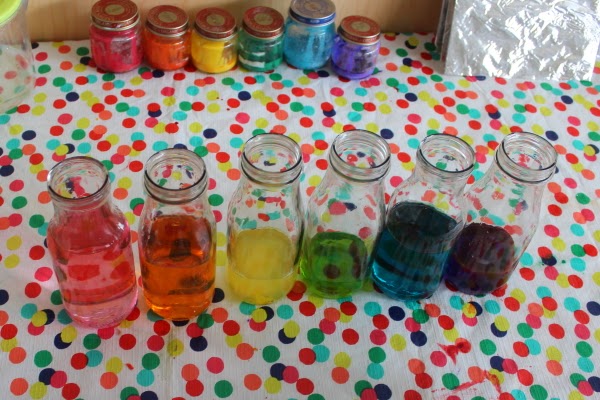 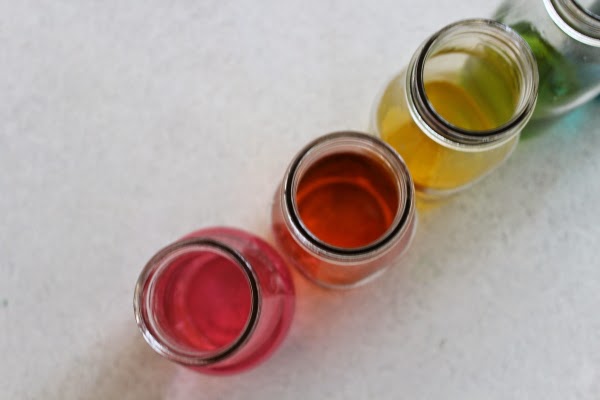 Aren't they pretty all lined up? The next day when we did the project again, the children in the next group poured equal amounts of water into each bottle. They worked very carefully and eyeballed their amounts. One of the children had an a-ha moment and went off in search of a measuring cup. It was super cool. 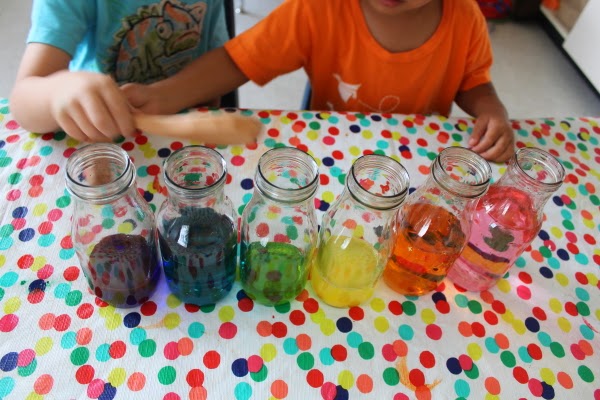 They had so much fun playing their new classroom instrument. Variety of sound was magical to them. The second rainbow xylophone made with equal amounts was also just as fun to play. One of the children noticed the sounds were not that different and another a-ha moment happened when he told the other children they need to change the water. 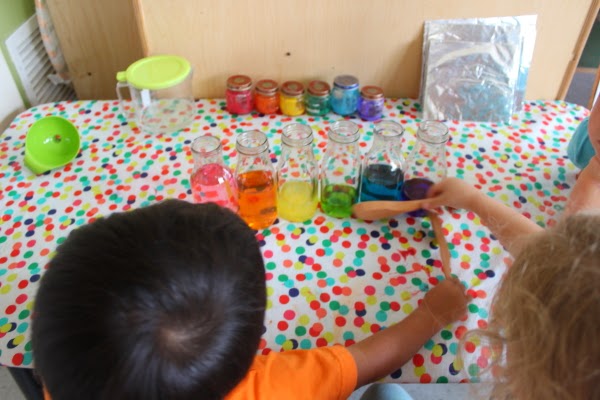 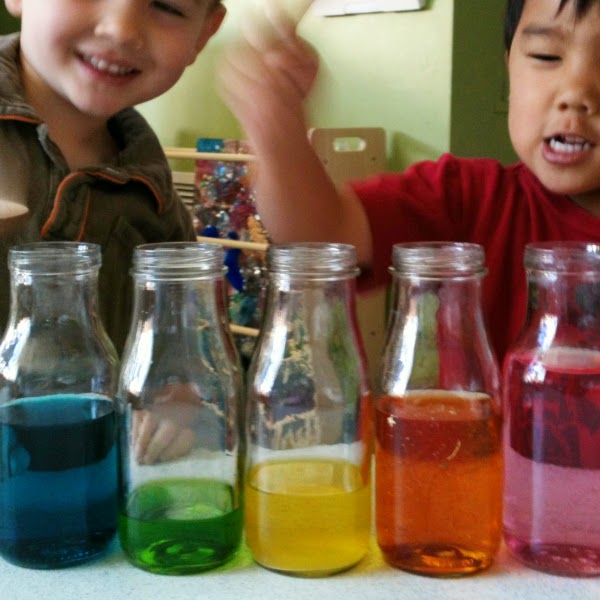 See? So much music and fun. Here are two of the kiddos playing their Jazz music. We play a lot of jazz in the classroom though their favorite is rock n roll. I have a video to post also. I just need to figure out how to make the file smaller. Stay tuned!
Posted by j. wilson at 9:00 AM

Email ThisBlogThis!Share to TwitterShare to FacebookShare to Pinterest
Labels: A Rainbow of My Own, math, music, play, rainbow fun, recycled play, science, sound