Assembling eight days of gifts for under $15.00! 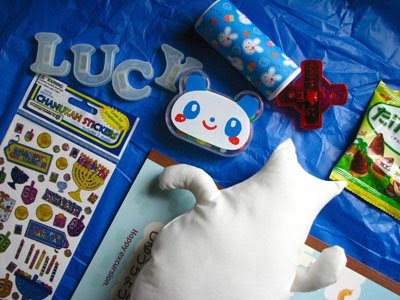 There are two fabulous Hanukkah celebrating kidlets in my life. This year, I put together eight days of giftiness, sort of like how you would stuff a stocking, for each of them. They are a brother and sister so I got "almost the same" gifts for each of them, wrapped them up in pairs so that they would each open up the same gift on the same day and put them into a nifty craft paper giftbag. The idea is that there are eight sets of presents to open. Some have two packages, one for each, and there two that have one package to be opened by both of them. Nothing too fancy but still items that could be fun and not take up too much space. These kidlets already have a fabulous assortment of toys and such so my goal was to be quirky and a teeny bit useful here goes! 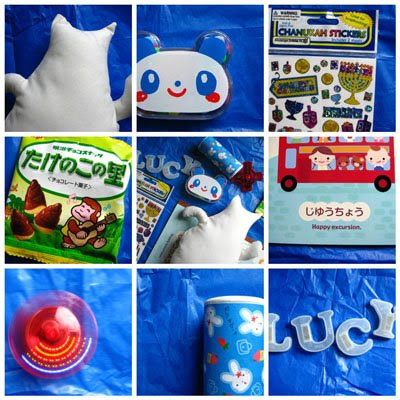 Clockwise from the top left:

The mister made the stuffies after a design that he sells. We used what we had.
The beads, notebook and cookies came from a Japanese dollar store. Total, about $6.50. The kaleidoscopes and tops came from a party store about $2.00. The magnets were from a dollar bin, and the sticker were from Michael's about $3.00. Grand total without tax was about $13.50 for two kidlets! Like I mentioned earlier, you can easily translate this assortment into stocking stuffers or even an Easter Basket.

Have Fun and Happy (almost) Hanukkah!
Posted by j. wilson at 8:51 AM